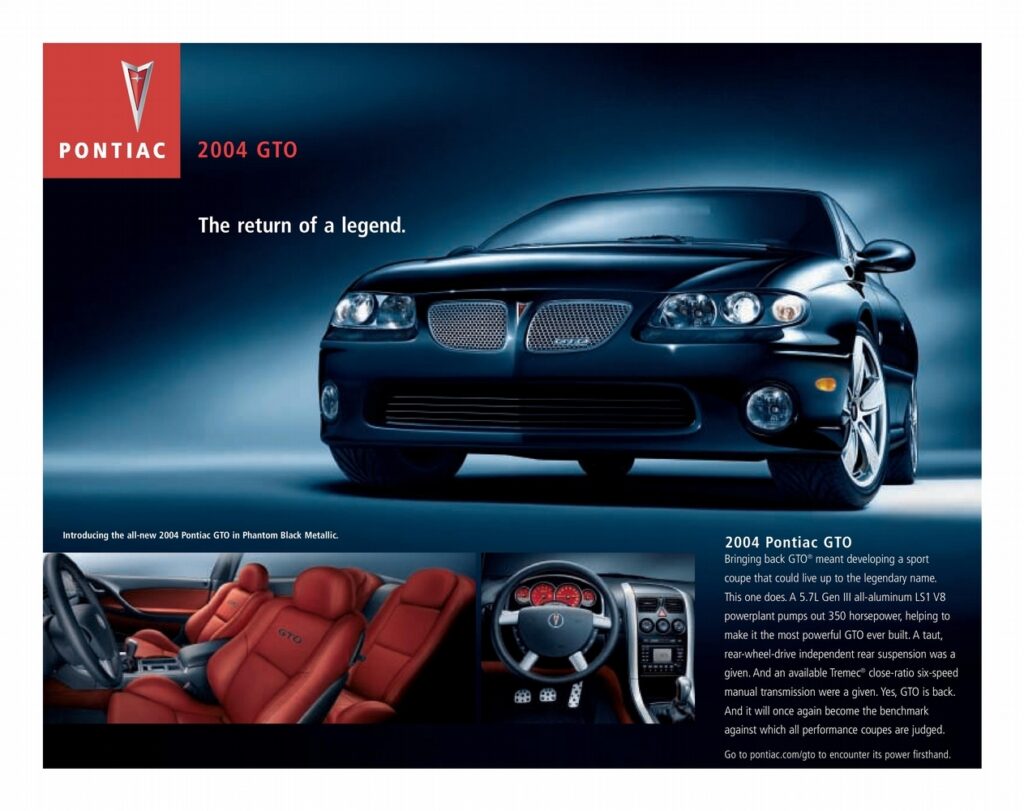 Ever wonder how many of your 2004-2006 Pontiac GTO’s were made? How about the number of exterior color options as well as interior options? Below you will find the factory 2004-2006 Pontiac GTO production numbers and specs and options available. You can download the full version of this report for each year in .pdf format at the end of each year’s production article. I hope you find this information as interesting as I did.

What are the specifications on the 2004 Pontiac GTO?
You can get most of the details at http://www.pontiac.com/gto (no longer available), but it is a Rear-Wheel Drive V8. It is built in Australia and imported to the US. It is very similar, with some differences, to the RHD (right-hand drive) Holden Monaro sold in Australia and an LHD (left-hand drive) Lumina that is sold in Asia and the Middle East. It has the LS1 engine that comes standard in most Corvettes, as well as the V8 f-bodies (Camaros and Trans Ams) from 1998 on. Its 5.7 liters motor is rated at 350 hp / 365 ft-lbs of torque. This seems to be an actual rating and not underrated like the f-bodies are. The current deal to import the GTO is limited to 18,000 cars per year for 3 years (MY 2004-2006). Speculation is ’05 gets hood scoops, dual exhaust outlet, and LS2 engine standard. Probably still not many options.

What are the options available for the GTO?
You can get a 4-speed automatic or for $695 you can get the Tremec 6-speed manual. The A4 gets the gas guzzler tax so is actually more expensive. There are 7 color options – six with multiple interior color options:

Some time has passed, and this FAQ was first written before most people even had their GTO’s let alone raced them. A good bolt-on/tuned 04 GTO can run high 12’s. Auto’s are faster than the manual trans cars which suffer more from wheel hop at launch. We have seen stock chassis GTO’s already in the 9’s. Hopefully, as time goes along we can get past the IRS hurdle and have a ton of 11 second naturally aspirated GTOs out there.

Does the GTO come with the LS6 block?
Yes. At this point, they don’t appear to be casting the original LS1 blocks anymore. The GTO has the LS6 block and intake manifold, with the LS1 heads and cam. There is some debate whether the cam is identical to the Corvettes and f-bodies. At this point, any printed information I’ve found shows them identical, but that may not be the case.

Does the GTO have a true dual exhaust and why does it only exit on one side then?
The GTO indeed has a true dual system – with no crossover pipe. The pictures appear to have a crossover, but it is solid and no gases pass through. The general consensus is that at the time for the design of the GTO from the Monaro, it did not allow dual exits – or Pontiac didn’t realize how much effect this has on some muscleheads.

What are the specifications for the 2006 Pontiac GTO?
For 2006 Pontiac made a few cosmetic improvements to the last for this final year of this generation of the GTO. Powertrain options remained the same. Changes include: